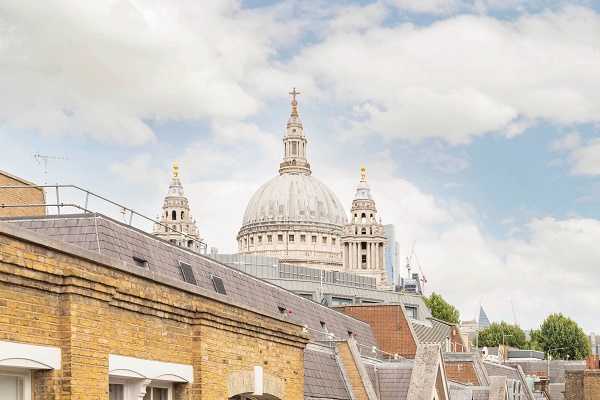 The property, which pre-dates nearby St. Pauls Cathedral, visible from the fourth floor roof terrace, is one of the oldest buildings on Carter Lane and has been meticulously renovated to create a characterful, modern home whilst retaining its original, long-standing features. 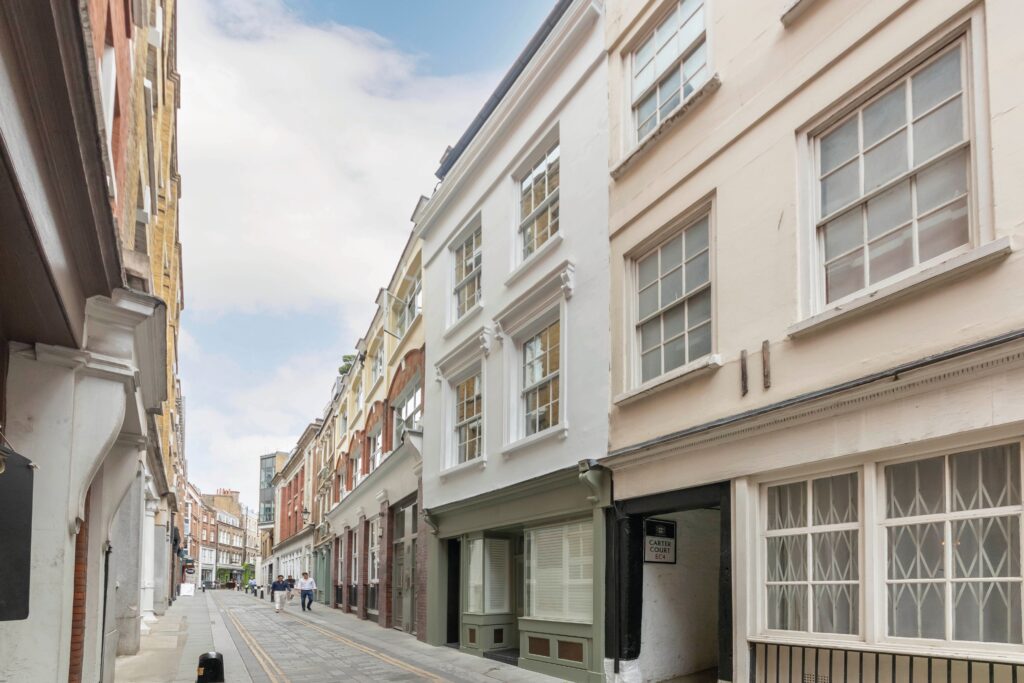 The property on Carter Lane is laid out over six floors, spanning from the lower ground floor right up to the fourth floor which houses the roof terrace.

The property enters into a beautiful dual aspect reception room on the ground floor which has panelled walls, an exposed original brick fireplace and windows with shutters. Directly below on the lower ground floor, is the open plan kitchen and dining room, complete with fitted appliances within sleek grey integrated cupboards and a kitchen island, finished in the same colouring and with an integrated wine fridge. Adjoining is a separate utility room.

Located on the first floor is the principal bedroom suite which benefits from fitted storage, sash windows and a walk-in closet with bespoke cupboards leading to a large en-suite bathroom with a free-standing bath and walk-in shower.

On the second and third floors are four further bedrooms, each with their own en-suite bathroom, whilst the top floor houses a second reception room complete with a small kitchen area, retractable skylights, and access onto the terrace with views of the dome of St. Paul’s Cathedral. 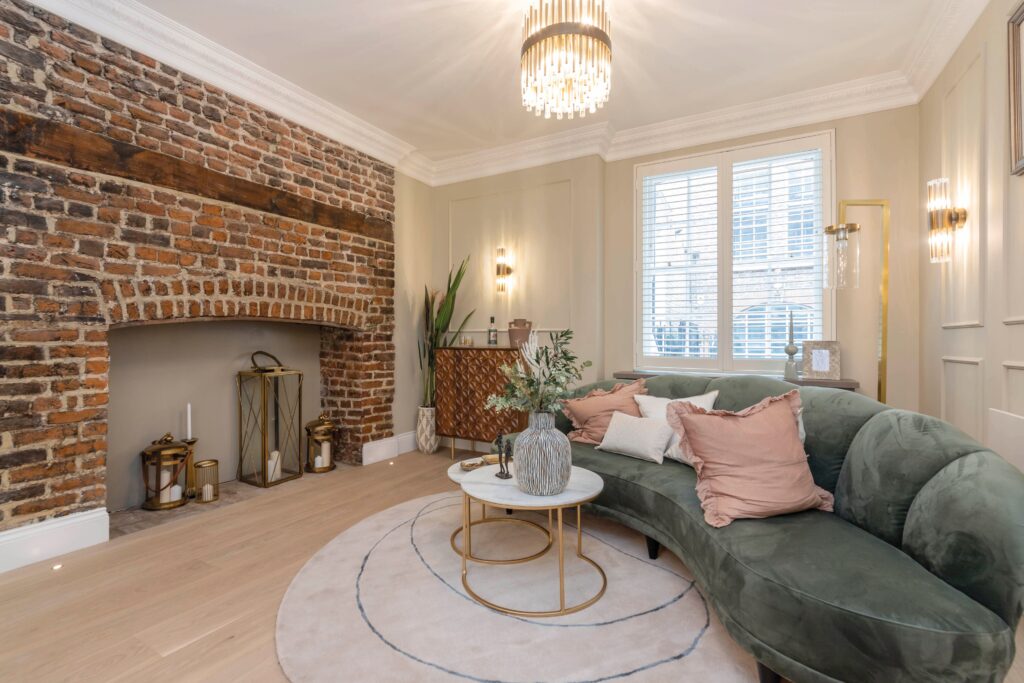 Set within a conservation area, the building was formerly used for commercial purposes yet has been fully renovated to create a contemporary residence. Each level of the property features a glass panel in the flooring with sight up to the top floor and there is air conditioning throughout which can be used to heat or cool the house and is individually controlled. 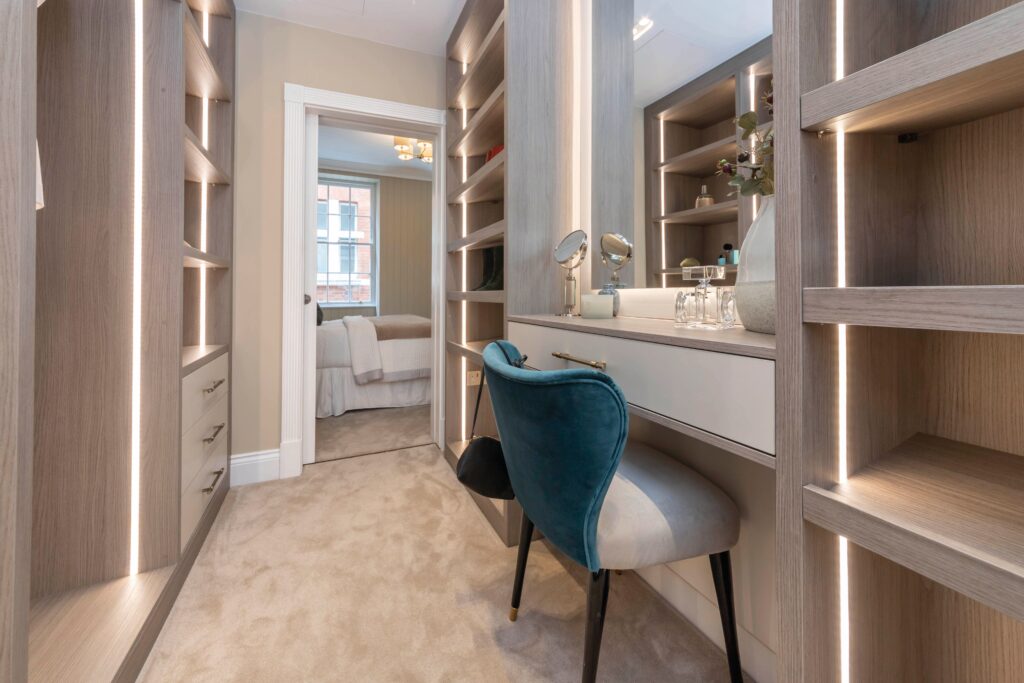 Dating back to the 17th Century, the Carter Lane property was built just after the Great Fire of London and has survived over 350 years, warranting its Grade II Listed status and making it older than the current, nearby, St. Paul’s Cathedral building which was rebuilt after the fire and officially completed in 1711. Carter Lane itself, originally a thoroughfare for carts in the Middle Ages, holds an abundance of history which adds to the rarity of the property. 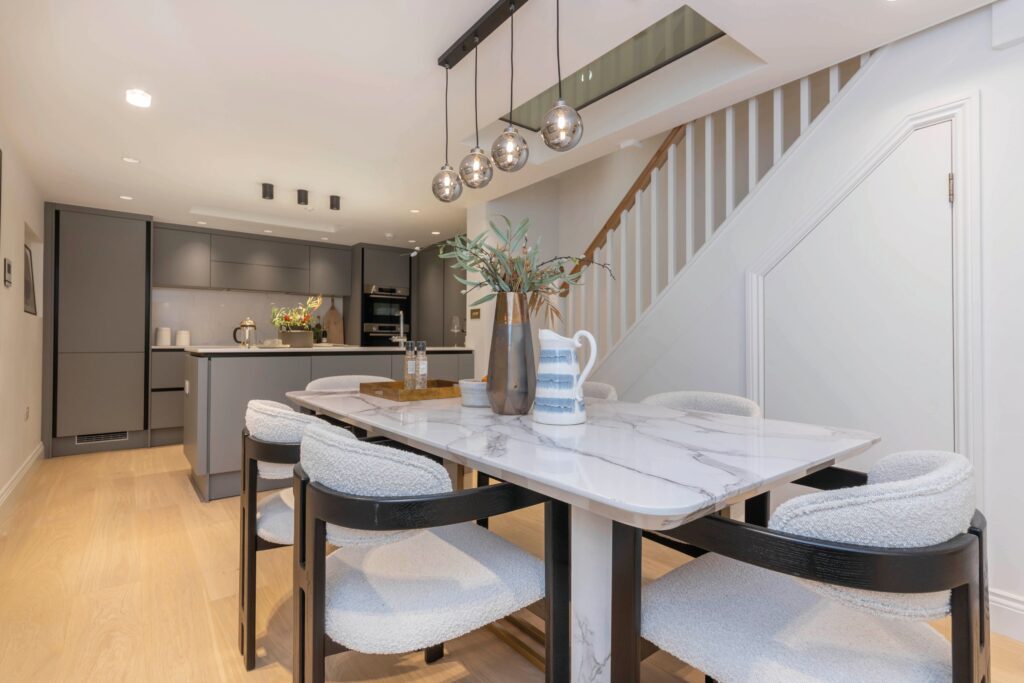 What is now Carter Lane, was initially known as three streets named Shoe Makers Row, Great Carter Lane and Little Carter Lane according to Rocque’s map of 1746. In 1866, the separation was abolished, and they became known simply as Carter Lane, one of the main thoroughfares of the city leading through the ancient “horse & cart” narrow streets, courts and alleys that make up the Square Mile. 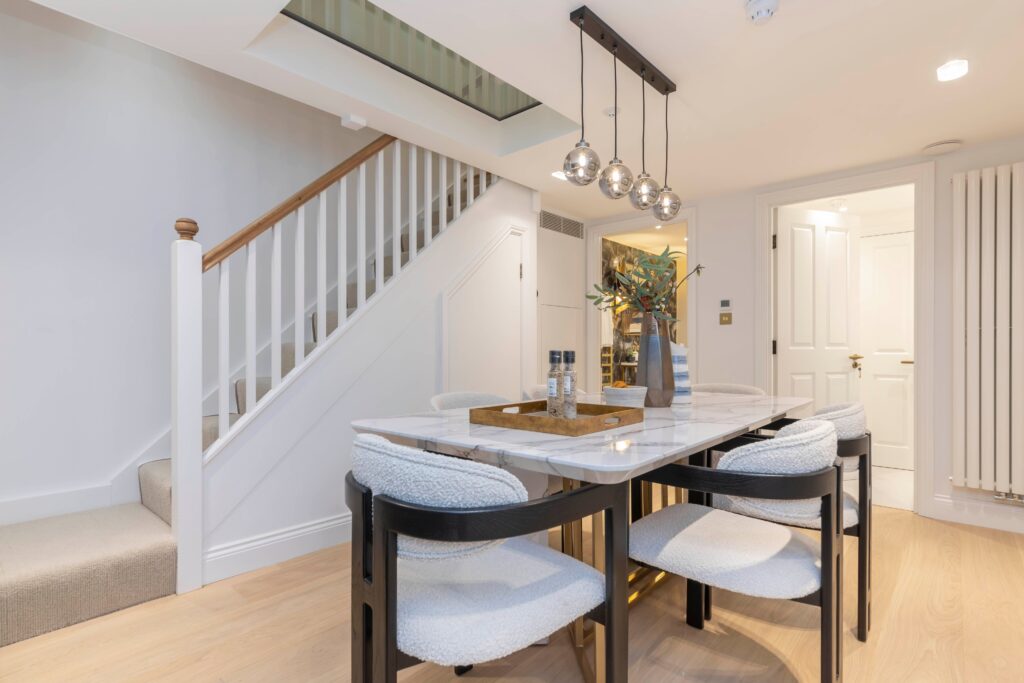 The lane was once home to the Bell Inn, a pub from which the only known remaining letter to Shakespeare was penned by Richard Quiney, father-in-law to Shakespeare’s daughter Judith, on the 25th of October 1598. The original letter can be found preserved in the museum of his birthplace in Stratford-upon-Avon. The Bell Inn was demolished at the end of the 19th Century, yet its site can be found on the corner of Carter Lane and New Bell Yard. 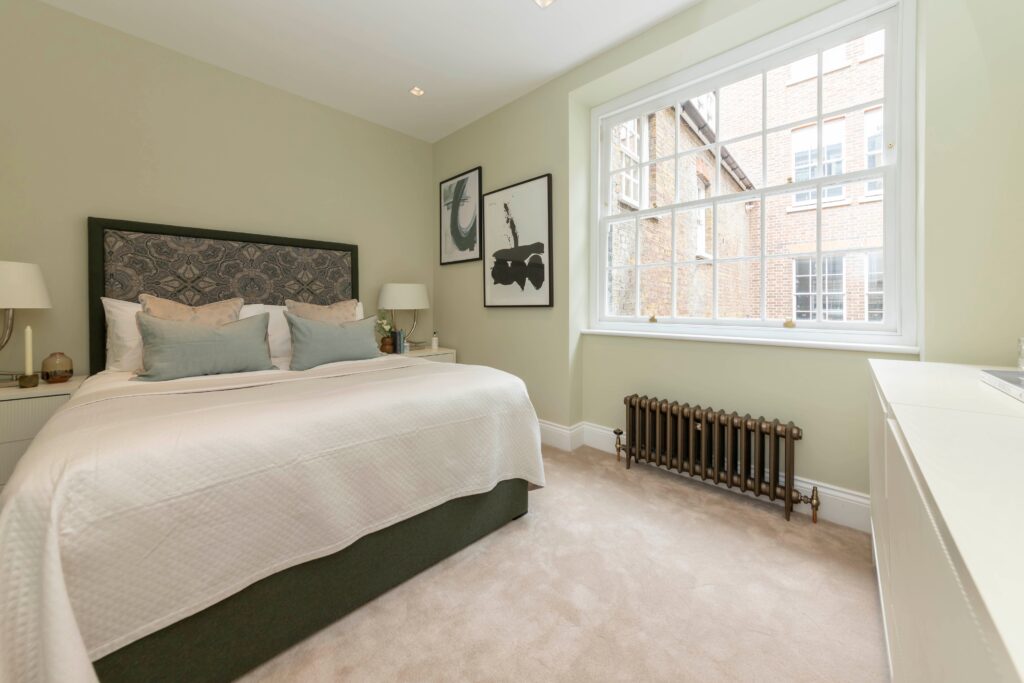 Further down the lane is a small archway leading to Wardrobe Place, a site that was once  home to the King’s Wardrobe, an institution that was created to be the storage place for the Monarch’s fine robes, jewels, armour and furniture. The Kings Wardrobe was initially set in the Tower of London but was moved to the site just off Carter Lane in the 1360s where it remained until it burnt down in the Great Fire of London in 1666. 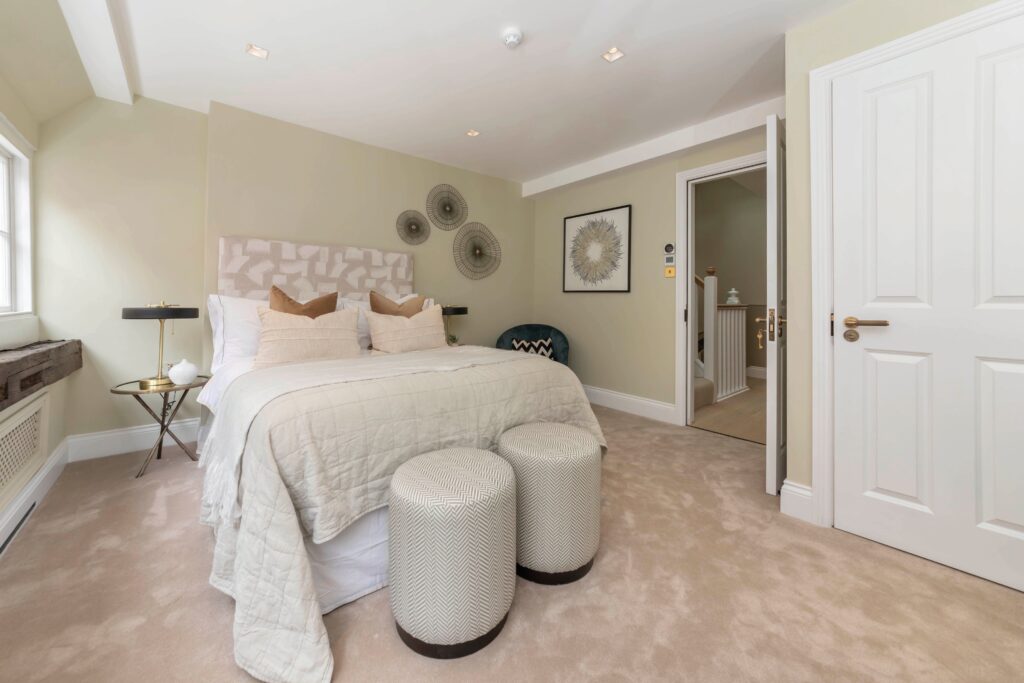 Now, the house is well located for anyone who wishes to be close to the financial district, the City’s legal quarter, City of London schools as well as all the attractions of the West End. It is also moments from the steps of St. Paul’s cathedral, as well as the continually developing shopping areas of Paternoster Square and Cheapside. The nearest transport links are at St. Paul’s Underground Station which is serviced by the Central Line or London Blackfriars Station with Southeastern and Thameslink services as well as the Circle and District Line. 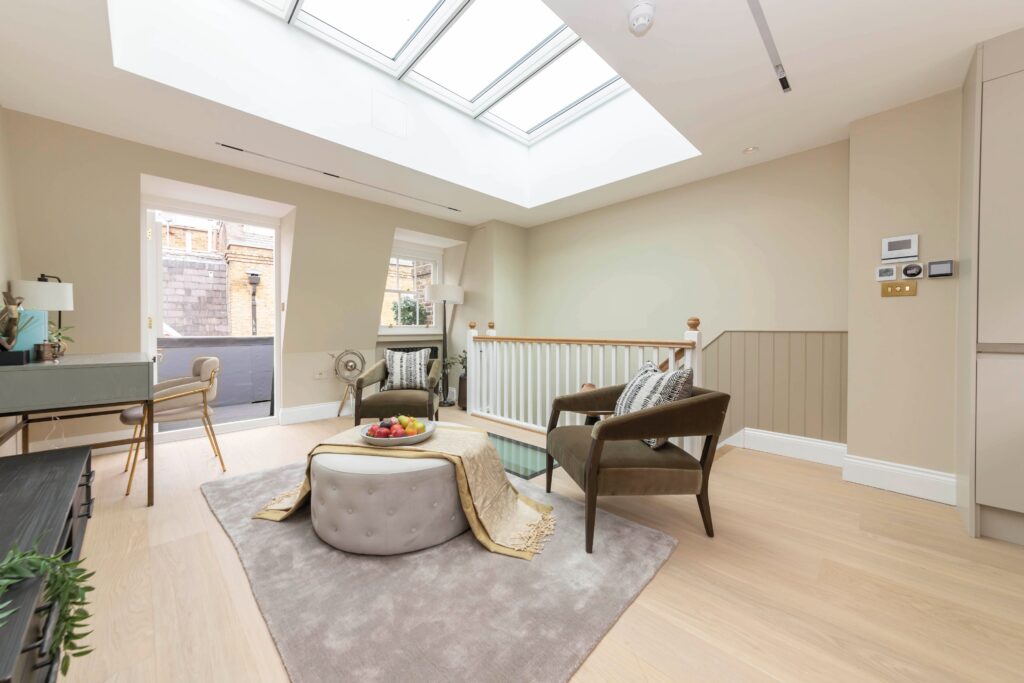 Tina Evans, Director of Frank Harris & Co’s Barbican, City & Clerkenwell office told LondonLovesProperty.com, “We are delighted to bring this excellent five-bedroom property to the market. The Grade II Listed building, dating back to the 17th Century sits on a lane steeped in history with a quaint village feel, creating an enclave amongst the hustle and bustle of the city. The house has been renovated to a remarkable standard and makes for an elegant home in a sought-after location.” 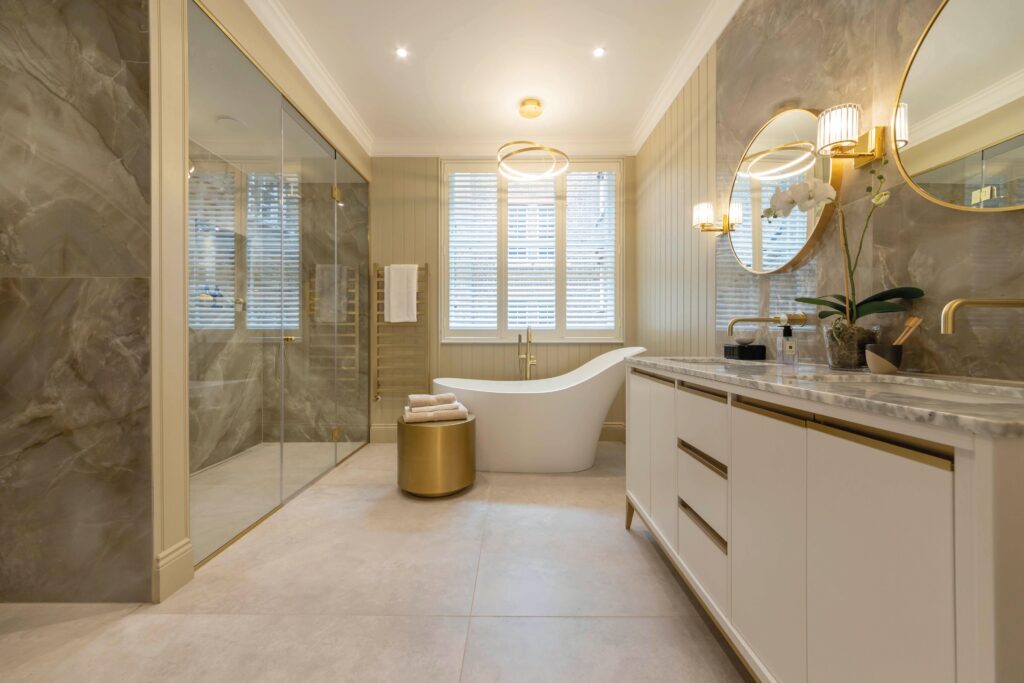 The five-bedroom Carter Lane house is for sale with Frank & Harris Co. for £3,000,000 with a video tour or in-person viewing available. For further information, or to book a viewing, please contact Frank Harris & Co.’s (Barbican, City & Clerkenwell) on Tel: 020 7600 7000 or visit  www.frankharris.co.uk