Home Property Board of Brexit? Here’s the perfect Brexit based Monopoly board to tear the family apart 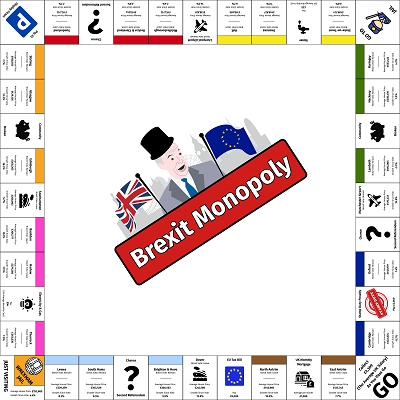 Board of Brexit? Here’s the perfect Brexit based Monopoly board to tear the family apart

Leading estate agent comparison site, GetAgent.co.uk, has created a board game that’s sure to bring the family together, before dividing them down the middle, Brexit Monopoly.

Using data on current house prices and price growth performance since the vote, GetAgent.co.uk switched up the famous colour squares to include the whole of the UK with areas ranging from: –

Founder and CEO of GetAgent.co.uk, Colby Short said, “Brexit has caused a lot of hostility and division across the UK and so we wanted to use it in a way that will hopefully bring people together and what better way than a board game and perhaps the most iconic one at that.

“With no end in sight, we could be talking Brexit for some time yet and so at least this can provide a brief respite from the politics and bring a lighter-hearted spin to things.

“We’ve tried to keep it as impartial as possible to ensure there’s a square for everyone and while it is just a bit of fun, we appreciate Monopoly can get quite heated, so hopefully, this doesn’t add fuel to those flames.”