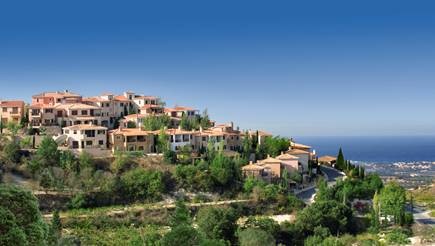 As Britain prepares to leave the EU, UK nationals are searching for new and innovative ways to make sure they remain “in” for the foreseeable future. Applications from UK investors to the citizenship programme have increased significantly since Boris Johnson became Prime Minister according to leading developer Leptos Estates, with over 500 applications submitted in the last few months of the year, making up a considerable percentage of the country’s annual allowance of passports[1]. With only 700 new Cypriot passports given out per year, Leptos Estates has seen an increased urgency among British buyers as Brexit date approaches.

Prompted by political uncertainty, many Brits being drawn to the sunny shores of Cyprus, where a property purchase of €2m or more will qualify them for full EU citizenship. Cyprus’ Passport & Permanent Resident Programmes offer UK buyers a gateway to Europe; its full strategic location across three continents enabling increased travel freedom, better access to education and healthcare, and the right to do business and settle in an expanded set of countries. According to a report released by Professional Wealth Management, Cyprus ranks among the top 10 destinations for residency-by-investment, along with destinations such as St Kitts and Nevis, Grenada, Antigua, St Lucia and Austria.

For UK buyers wishing to remain within the EU, a property purchase of €2m in Cyprus will qualify them for a full Cypriot passport and EU citizenship, with the right to live, work, travel, stay and study anywhere in the EU, and free travel to over 155 countries including Canada, Switzerland, and Iceland. The Cypriot passport only takes 6 months to come into effect and once acquired, is valid for life, and covers their spouse, parents and any dependent children up to the age of 28 years. For Brits whose plans to retire to Europe via the EU’s freedom of movement have been smashed because of Brexit, the island’s citizenship programme is an attractive and quick way out of the dilemma.

For UK entrepreneurs worried about the impact leaving the EU will have on trading, full citizenship will provide them with access to free trade within the EU and opportunity to reach over 500m EU citizens. The scheme does not require investors to relinquish their current passport, and there is no need to physically reside in Cyprus to qualify. Citizens then have the right to sell his/her property after 5-years if they retain one at a value of €500,000, and the current rate of rental returns and capital appreciation will mean investors get their initial investment back in 5-years.

The second option for overseas investors is Cyprus’ permanent residency scheme, which can be reached through a property purchase of €300,000. This option takes typically only 60 days, and although this does not allow you to take up employment in Cyprus, it does allow you to open a business. Like the citizenship scheme, this covers the entire family and does allow you to then (under the right circumstances) to apply for a Cypriot passport. Permanent residency holders are also entitled to apply for a Schengen Visa through any Schengen Embassy.

The former British colony ticks most expats’ boxes with regards to the sunny climate, use of the English language, established expat communities, an affordable cost of living and plenty of natural beauty and culture. Cyprus has also invested heavily in its infrastructure, including a new DP World cruise terminal in Limassol, the construction of Europe’s largest casino resort, private jet and yachting services, golf courses and new designer retail offerings; facilities and services that have transformed it into a lively, cosmopolitan destination.

Paphos, best known as the birthplace of the Goddess Aphrodite, remains a popular tourist destination and the top Cypriot destination for UK buyers. One of the most beautiful regions in the Mediterranean, Paphos is home to a UNESCO World Heritage Site, numerous historic landmarks and some of the island’s most attractive real estate.

Only a four-hour flight from the UK and at a midpoint between three continents, Cyprus has cemented itself as a “centre of excellence” for international business. Traditional sectors, such as shipping, tourism, banking, financial and professional services, have been the key driving forces behind the island’s economy for years, while new sectors, such as energy, investment funds, development, education and wellness tourism, offer a new and existing perspective that will drive the economy forward.

On top of this, the country’s tax system continues to entice international purchasers. The corporation tax rate for all companies is just 12.5% and estate duty has been abolished since January 2000. The first €19,500 of earned annual income is tax-free, whilst foreign pensions above €3,420 are taxed at 5%, both reasons why more foreigners purchased homes than Cypriots in 2018.

The country’s largest developer, Leptos Estates, has an extensive in-house team offering a totally comprehensive service for buyers looking to remain in the EU and hedge against political uncertainty.

Pantelis Leptos, Deputy President of Leptos Group of Companies said, “The current political uncertainty surrounding Brexit has helped drive interest from UK buyers here in Cyprus. Cyprus is an EU country and EU residency and citizenship are seen as hallmarks of credibility, so it’s no surprise the residency programme here has been so popular.”

“The scheme is a relatively simple and quick process, and we offer a totally comprehensive service, removing the stress for our clients. For British investors looking to remain within the EU post-Brexit, this is a simple and effective way of achieving this.”

“Paphos remains the most popular location for UK buyers, due to its beautiful landscape and array of property types and styles. English is widely spoken on the island, flights are regular, and the weather is reliable, making it a hotpot for British investors. We expect application numbers to only increase over the coming months.”