Our columnist Alessio Rastani is the self-proclaimed trader who shocked the world by declaring live on BBC News that he goes to bed “every night dreaming of the next recession” and that “Goldman Sachs, not the governments, rule the world”. He’s a controversial figure, not least because he’s a self-taught non-institutional trader with no FSA license. But he certainly isn’t shy about sharing his views. Do you agree with his words? (His words are his own and not endorsed by LondonlovesBusiness.com.)

House prices in London have soared for more than a year.

Take a look at this chart: 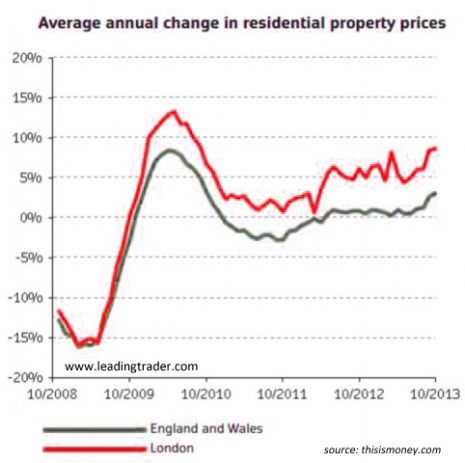 Such a rapid surge in house prices caused me to warn of a “bubble” in the London property market in my November article: 3 Bubbles That Need To Burst .

In the article, I quoted my mortgage broker, Mark Scott of Lifetime Wealth Management , who said:

“It’s absolutely crazy right now. It’s a seller’s market. I’d wait for a correction in prices before you buy.”

It turns out that Mark’s warnings were very timely.

On Thursday last week, the Bank of England made a surprise decision to ease the risks of a property bubble. It announced that it would put the brakes on a scheme launched last year to help boost mortgage lending.

The Bank said that the Government’s Funding for Lending scheme will be terminated for mortgages at the end of 2013. This scheme was a form of funding which allowed banks to cut their mortgage interest rates to the lowest levels ever.

Some real estate experts have said that the Bank of England’s decision is unlikely to slow down price growth in London.

“This changes everything,” he said. “Seventy percent of the gains made this year in London property prices will be wiped out.”

Mark is a cautious individual and he chooses his words carefully. So for him to make that bold statement was shocking for me.

“So how much of a correction in prices should we expect for London properties?” I asked.

“It’s hard to predict these things…” Mark replied. “But a 10% correction is likely, I would say. Although some regions may only see a 5 to 7% decline.”

Mark realises that he could be wrong. After all, one of the tendencies of “bubbles” is that the markets are irrational.  Prices are driven not just by fundamentals but by the “madness of crowds”.

However, Mark had one final warning for investors:

“If you are looking to buy a property in London, I would wait until a few months. We don’t know how long a correction in prices will last but in my view it is likely to last until summer of 2014.”

Alessio Rastani is a stock market trader at LeadingTrader.com