Plans to sink £1bn into the renovation of Blackfriars are to be submitted this week.

The Carlyle Group revealed yesterday that it will put forward plans to build nine buildings in the area between Blackfriars Bridge and Tate Modern.

The proposal will see almost 500 homes intended for City workers, as well as 25,000 sq ft of retail space and 450,000 sq ft for office space. It is expected that the project will bring in over 1,700 permanent jobs to the area. The tallest building in the proposal will be 48 stories.

Public open spaces and cultural areas have also been designated.

If approved, the American private equity firm will carry out the scheme in partnership with construction partners including UK’s Berkley Homes. 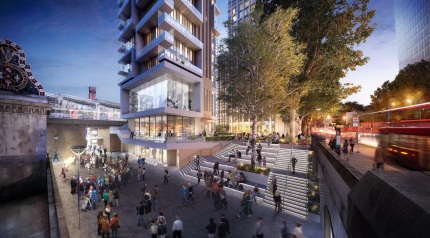 “This is a once-in-a-lifetime opportunity to truly regenerate and reinvigorate a large, important and extremely well located but under-utilised site right on the River Thames,” says Mark Haiirs, Carlyle managing director.

“Our aim is to create a new and vibrant destination are through a phased, deliverable regeneration project that will deliver many new, and much needed, homes for London’s workforce, and bring thousands of jobs to the area.”

It is hoped that the £1bn investment will compliment government spending plans to revamp the area. As part of ongoing projects, neighbouring London Bridge station is undergoing a £500m rejuvenation.

The Carlyle proposal comes on the back of announcements that some 100 sky scrapers are  either under construction or have building permission in London.

Over 100 skyscrapers rising up around London, report